Wellwadayaknow, it's another B SIDE BANGER!

The über classy Rucksack Records over in The Netherlands are soon to drop this new Kid Sundance 45 featuring two distinct spins that pay homage to the sounds and techniques of hip hop, diggin' and hands-on production.

The A side is apparently a remake of a beat from 1992, it's one that I don't know and, well, yeah, it's alright-ish. Kind of slick, phat bass licks, but doesn't really do a lot, a bit boring to my ears (sorry guys).

But no matter because flip the wax for the B side :) Residing here is another beast entirely, an uptempo raw and super funky disco joint that stemmed from an obscure dig that Kid Sundance made, stretching out and adding a bunch of sonic bits and bobs you'll recognise, and also adding a part 2 switch-up. For me, it's all about part 1 though, such a snappy scratchy number with a super tight upfront snare that really shines. It's a wicked DJ tool for sure, crank it into the mix and watch the floor bounce. 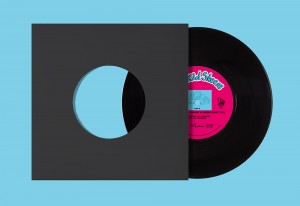