After our intrepid private investigation team finally tracked this band down in Hamburg’s murky underbelly all we had on our minds was that we had to prove what the world was asking - are this funky quartet actually capable of telling the truth? We hooked each member up in turn to the polygraph and the results are conclusive. This band are a bunch of kidders, constantly pulling the wool over people’s eyes and leading them up the garden path. I mean, they claim this is their debut release but on the strength of this release they give the impression that they are seasoned players, effortlessly stitching the funk into each Hammond stab and guitar lick. The listender is treated to the deluxe funk workout thanks to drummer Lucas Kochbeck, guitarist Legbo and bassist Tim Ertl who showcase on this release that they have well and truly arrived. We look forward to a Kidding album in the not too distant future. 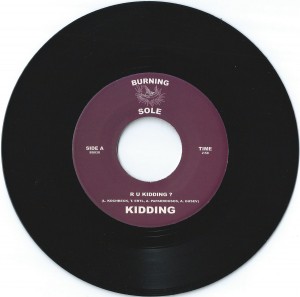