Rocafort are back with the 3rd volume in their impressive Latin Underground Revolution, a series that features various artists in a triple 7" pack.

This time the focus is on the Ansonia label from NYC, a label that I personally hadn't come across before which is surprising (to me!) because their catalogue is huge. And this is why labels such as Rocafort are important to music fans, they lovingly research and curate bodies of music that we may never stumble across otherwise.

Going all the way back to 1949 as a division of the mighty Decca Records, the Ansonia label was created to cover Latin American music recorded by Puerto Rican, Cuban, and Dominican immigrants in NYC as well as using studios in San Juan, Havana and Mexico City. Having a dig through Discogs as I write this review reveals some very deep Latin sounds, especially with the early stuff! But this release focuses in on the period between 1960 to 76. Arguably the greatest period in recorded music, it's one which saw cities like New York explode as a melting pot of culture that bore crossovers and new genres that took their cues from traditional and authentic musical styles from across the world.

We can see this musical cross-polination here in tracks like the freewheeling hippie vibes of 'Do You Want To Be Free' by Gilberto Sextet, I can imagine groups of friends from Spanish Harlem or Grenwich Village throwing this on the 8 Track as they head up to Woodstock. A vibes and psychedelic organ led boogaloo with subtle breaks, it really is hip! Sticking with boogaloo, Joesito Mateo Y Su Combo's 'Boogaloo Para Ti' is very much more of a traditional flavour and is wonderful for it.

Another highlight of this deep selection is the Noro Morales' descarga 'Vitamina', a beautifully stripped down piano and percussion workout that sounds amazing. No doubt due to the remastering from the original tapes by Dave Cooley who has done a fine job here across every track.

Once again a fine selection and certainly one for afficiandos of Latin American music. 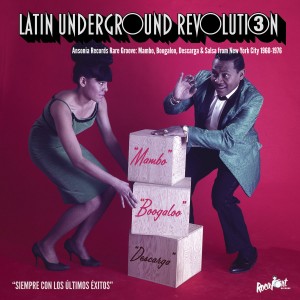