Producer Oonops has aleady made a name for himself thanks to his work on the mighty Agogo label but on this occasion he has a new project under his own label 'Oonops Drops'. A label that aside from the music focuses on sustainability, climate protection and socio-cultural values. We're here today to talk about those artists he has enlisted who between them offer us some serious talent to mark the occasion. Pat Van Dyck handles the remix for the label and it's a top choice as this producer always gives each project he is tasked to do his undivided attention. Here's what the label had to say.

The feel good song 'Everytime' from the album 'Serendipity' by Lisa Decker & Japanese Jazz trio Nautilus gets the Pat Van Dyke treatment plus a special appearance by South Bronx born emcee John Robinson aka Lil Sci of the legendary east coast group ScienZ of Life who performed with the likes of The Roots, Common, Talib Kweli, Mos Def, Run DMC and MF DOOM to name a few.

Multi-instrumentalist, composer and producer Pat Van Dyke from New Jersey is giving the song a totally new direction with playful horns and heavy bassline to get the soundsystems bumping.

About Lisa:
Starting with music from an early age, Lisa Decker wrote and pre-recorded some of these nine songs at least 25 years ago when she was a teenager. In the last years the songs got several times reviewed, reworked and complemented with new works by her besides being a full time (music) education teacher. You could describe the final results as a Pop album with many influences from Jazz, Hip Hop, Funk to Reggae surrounded by a Japanese sound spirit. The original demo tapes from back in the days are still alive. 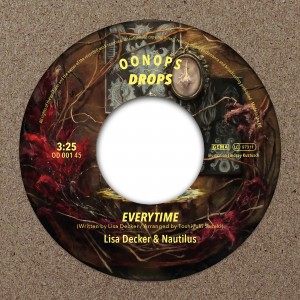