When it comes 'edits', Mako & Mr Bristow have a knack of marrying up exactly the right beat and melody to satisfy the artistic integrity required, at the same time as fulfilling the record's raison d'être of luring people onto the dancefloor, which in this case is happily. Kicking off with Dave Mason's classic 'Feelin' Alright', the archetypal jazz-rock number, but re-rubbed here as 'Stealin' Alright', fusing steel drums on top of the stoned Californian vibes for some discordant and tasty Caribbean Jazz-Rock Fusion, now that's a not a genre that you come across much. Flip over for the classic trance-soul of Nolan Porter's 'Keep On Keeping On' being transformed into 'Stolan Nolan' with some extra flourish and added über-oomph for a gritty northern shaker. And for me, yes you guessed it, the B-side is where I'll be-residing! Another quality record to add to the pile to play out when we can finally do so.

Have to say to Mako and Bristow "...now breathe". I think they suffered every conceivable technical problem that you can suffer from pressing records, but they got there in the end, after many months. Many dancefloors will be glad they did. 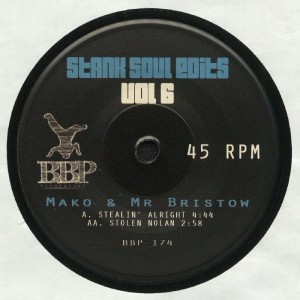