Marc Hype - With a box of 45s through india

End of october 2014 i had the opportunity to tour 2,5 weeks through india as part of an artist collective put together by the German-Indo Hip Hop Project. Besides me we also had two Graf Writers, a B-Boy and a B-Girl and a Beatboxer.  My role was obviously the Dj, to spin for B-Boy Events and selected Clubgigs and Jams. The route went from Delhi to Bangalore to Mumbai.

As it was my fourth time over there already, i was somehow used to most circumstances that happen in this amazing country. Still i needed to get a few days, to get into the indian mood again, as it is a totally different planet over there! I brought a box of seventy 45s with me to expand my mission and promote the art of spinning donuts to the fullest, which is not the easiest in this country. Turntables are rare, mostly supplied by the older hosting DJs. The standard clubs or bars mainly have CDJ Players. But like every time we managed to get a pair of Technics 1200s and a decent Mixer (they had mostly Pioneer 900s or Rane 62s!) in all places i've played. There isn't really a vinyl culture over there, even if there's a few die hard record nerds and traders, but most of the people have never seen a 7", forget about that somebody would play them in a club!

The tour started in Delhi, where i spun at the Social Offline club and a Hip Hop Four Elements Jam. Beside that i met the grandfather of Hip Hop Djs in India, Jazzy Joe. he invited me to his house of records. Joe started DJing in '84 in Jakarta and eventually moved back with his family to Delhi in '88, where he was the only Hip Hop DJ at this time. In his house he got two rooms packed with 20000+ records, mainly original Bollywood Soundtracks and classic Funk/Disco/Hip Hop stuff. He also had about 2000 Bollywood 45s, from which i havn't heard from any of these! He got an amazing collection, which i had the chance to dig through a bit. He's also selling lots of them via his website www.recordsindia.com. At the end of the day we'd put a 80's Electro set together for his performance the next day at the biggest north indian Hip Hop Jam called Hip Hop Hurray. He's just a great guy, down to earth with vast knowledge of Bollywood music you just can't find that easy.

A few days later in Bangalore i've spun with Dj Uri, my No 1 buddy from Mumbai, at a local B-Boy competition at a big outside recreational venue. The night before we played the Social Offline club there, which went out quiet good as well.  We had a few days to check the city and i was looking for some record spots, as the prices are way more down than in Mumbai. But like it is on such tours, with lots of people involved, the timeframe was just to tight and i couldn't find the right stores on time. There's always be a next visit i'll guess.

When we arrived in Mumbai i had again the chance to hold a lecture about DJing at the True School of Music, an american music school, settled in the heart of the city, with state of the art facilities and equipment. This year i was lecturing about spinning and travelling with 45s, which was completely new to the students, who are used to learn mixing on DVS systems and producing with Machine. It was again a very interesting experience for all of us to say at least. I met with my Berlin DJ fellow Grzly Adams there, who did the second part of the workshop, introducing new controllers from  Native Instruments. This night we also spun together at the new hot spot called IBar where i met lots of my clique, that i've befriended over the last years like Reji, Pritesh & Manmeet Kaur. Besides visiting the world heritage site of Elephanta Island and playing the biggest Mumbai BBoy Jam called Cypherholics, the rest of the week i chilled with Uri, Grzly & the gang, had some crazy afterpartys and whatnot. Mumbai is a crazy city, day and night! 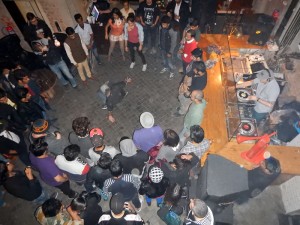 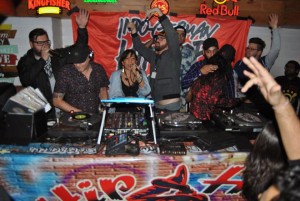 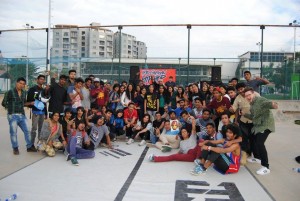