The album 'Spice of Life' by Marlena Shaw is one of the most perfect soul albums of all time which features many truly wonderful tracks, including the perennial and much loved 'California Soul'. Recorded in 69, It's an album that's ahead of the curve production wise, lush proto-funk throughout, as vividly shown on the 2 cuts lifted from the LP here. 'Liberation Conversation' is a stuttering spaced out wah wah driven classic with Marlena's scat vocal accentuating the groove wonderfully. The flip features another of the LPs big tunes, the epic 'Woman of The Ghetto' which got lifted on the club hit 'Remember Me' by Blueboy a bunch of years ago (albeit the live version). Totally classic Marlena Shaw, why would you not want this on a 45. Perfect. 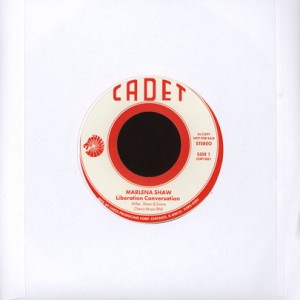