Being someone who first started spinning rekkids as a DJ in 1989 has meant I've almost been programmed to love a certain sound, it's one that was loosely termed cut n' paste. That ethic has produced some of the most loved and greatest dancefloor music ever made in a multitude of genres.

From early house, hip house etc that was borrowing funk riffs from James Brown to the most productive arena of sampling that was hip hop before the lawyers got involved, big beat/breakbeat of the mid-90s, jungle and D&B...we could all count many cut n' paste gems as some of our most cherished tracks.

So for me, there's something almost unquantifiable, something that makes it cut n' paste instead of an edit, so I guess it just has to be the approach that a particular producer takes, and that approach absolutely must be borne out of a love of De La Soul, Major Force, Steinski, Coldcut amongst many others.

So far absolutely everything I've heard coming out of the Mountain 45s camp, from the 2 45s released so far and especially all the little teaser clips of beats and breaks on Instagram or Facebook, has shown a level of class, awareness and love of the (cut n' paste) genre.

On this long-anticipated 2nd release on the label, we are treated to an excellent use of the classic Bob James song that's been used in D&B (Adam F), Electronica (Massive Attack, UFO), and of course a LOT of hip hop (DJ Jazzy Jeff & the Fresh Prince, Digital Underground and many more, and pasted it together with the Steve Miller classic that been used by even more producers (Nas, Biz Markie, EPMD, Ice Cube, Pete Rock...)! Jim has used his talents beautifully on this, it sounds as if was always meant to be like this, just slick production from the first beat to the last.

Over on the B, Double A throws some funk for the folks into the blender with some phat funky beats and raps from you-know-who and gives us a slab of perfection for the dancefloor. Lots of space in the arrangement for gettin' busy too.

Both of these joints are a bit '90s', and that for me is a wonderful thing, I say bring that sound back and bring it back hard!

Are Mountain 45s leading the charge? Quite possibly so. 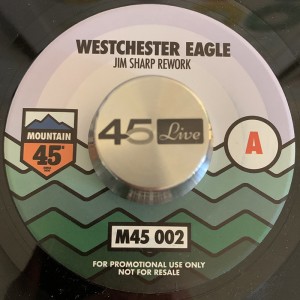 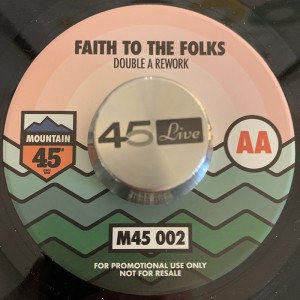