It’s time to sit, back, recline and settle in as Moves rolls up this smoker’s delight that’s sure to appeal to those that favour their hip hop without the seeds and stems. On ‘Smiggity Smoke’ the producer teams up with Edmonton rapper Touch as they celebrate the fact that the doobie is about to become legal in Canada. That’s not a joke son! It’s about to become a reality and Moves and Touch are here to soundtrack the quiet revolution.

On the flip side 'Nightlife', Moves shifts up the gears and heads for the club. This time he’s got rapper Fatt Matt in tow who spits out some fine malt lyrics about his adventures the previous night. He paints a vivid picture of the early hours which is a small wonder because he shouldn’t remember any of it at all due to the intoxication levels described!

With beats and cuts by Moves on both sides, pick this 45 up today from Black Buffalo Records before they all go up in smoke! http://blackbuffalorecords.ca/product/dj-moves-smiggity-smoke-nightlife/ 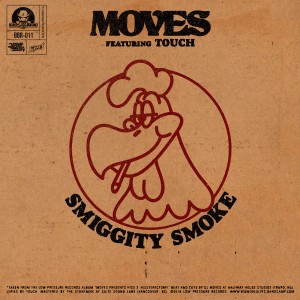