We enter another week here at 45 Live with a summer statement of intent forty-five from none other than man about town Oonops who teams up once again with Japanese funksters Nautilus to deliver for the warm weather and cold beverages for his 'Oonops Drops' series. In the frame this time are vocalist Kei Owada and rapper Abdominal who do so much damage on this version that well, if the sun don't bake us like Anita then the native saccharin sounds and clever fast rap wordplay certainly will. Of course it’s Nautilus who are weaving this summer jam together with some break ya neck drums and dusty Fender Rhodes tones that bring this De La cut up to date. What’s more, they bring German producer glueset along for the ride and he brings his own set of drums to the party. Here's one record that is certain to blow up the spot and not just on your favourite day of the week either. 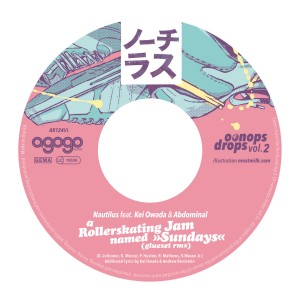