According to The Village Voice, M-TRI & DJ Leecy T have the, ‘energy and style that’s made them mainstays of the New York underground.’ The Source magazine has named DJ Leecy T, one of ‘10 Female Hip Hop DJs Keeping The Culture Alive.’ M-TRI & DJ Leecy T are breaking down the walls of obscurity with their fresh boom bap sound and distinct style of hip hop.

On his own, M-TRI (Emcee/Producer/DJ) was a capable hip hop architect, crafting acrobatic rhymes filled with clever subject matter, wordplay, punchlines and metaphors over a vicious flow, but as a solo artist, he felt there was an element missing. Around the same time, Felice was taking a break from modeling to follow her roots in music, specifically her love of hip hop. They met, and M-TRI took on a mentoring role, helping Leecy T hone her craft. Before long, DJ Leecy T was born, guest deejaying at venues alongside M-TRI and holding down the turntables during his live stage shows.

During this time Leecy T won the award for Best New DJ at the 2009 Rapathon (Hip Hop Culture Center) and became a guest deejay on the Equilibrium Radio program, airing on 90.3 FM in NYC. A male emcee and a female deejay with an interactive live show were immediately embraced, and they continue to prove themselves no mere novelty, having performed with eMC, Homeboy Sandman, Talib Kweli, Large Professor and Neek the Exotic, Rah Digga, M.O.P., Sadat X, Kool G Rap, J-Live, Masta Ace, Marco Polo, Nitty Scott MC, Dana Dane, Grandmaster Caz and Grand Wizard Theodore, to name a few.

They digitally released their fantastic boom-bap hip hop album ‘Monday Morning Music’ in September of 2015, and it enjoys a cult following for its old school flavour. In fact it probably was under the radar of many, including us! But when we heard ‘She’s The DJ, He’s The MC’ on a DJ mix by UK DJ Paul Bloomfield, we immediately got in touch with M-TRI to see if we could press a 45. Music this good has to be on vinyl, and this 45 sees an extended mix for 2018. The record perfectly shows the versatility of this talented hip hop duo, with them swapping roles on each side, tight cuts, sweet raps, boom-bap party beats and and whole lot of NYC flavour! 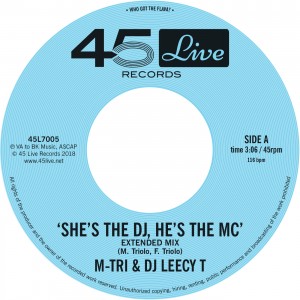 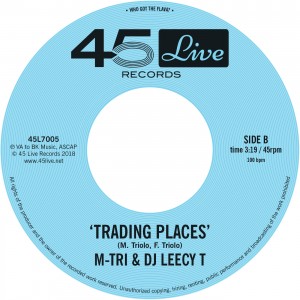 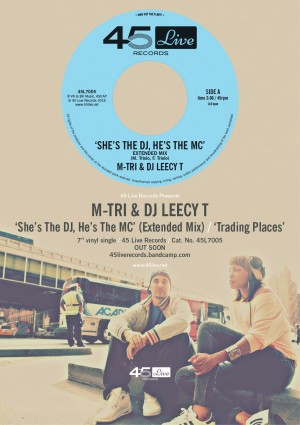