OK, it’s taken us to get to our 11th release for some filthy organ funk to grace the label, and who better than The King Rooster.

Hailing from London, The King Rooster are a heavy funk quartet consisting of Ian Stevens on bass, Mark Claydon on drums (both from another heavy funk band - The Getup), Sam Montero on keys and James Forster on guitar.

The band have released a clutch of heavy-duty organ funk 45s on various labels over the last few years (Our Label, FNR, Dinked, Burning Soul) and a spectacular LP, also on Dinked. But it was when we heard ‘Snitchin’, Stitchin’ & Bitchin’ on Funk Night Records that we decided 45 Live needed some Rooster funk on the label!

It is entirely evident that the guys all have a deep love for raw funk, that gritty, slightly shambolic garage sound, punchy instrumentals designed to hit you in the gut, pure soul from the pure funk perspective. It’s all about the ‘nasty face’!

Here we have 2 hard-hitting organ screamers kicking off with ‘Snake Bait’ on the A-side, a raucous 144bpm dancefloor burner. Scratchy guitar, thumping bass and manic drums underpin a swirling and ever building Hammond Organ into a firey crescendo. Whilst over on the B ‘Stickin’ it’ takes some cues from The Meters sound with its trance like organ riffs and bluesy flavour. It’s a raw mid-tempo head-nodder which, like the A-side, keeps building and building into such a cookin’ groove. 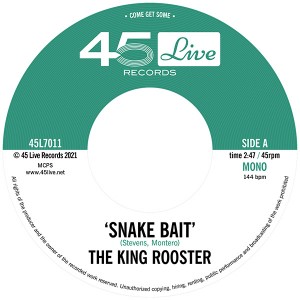