Opensouls 'Turn It Up!' (Mukatsuku)

Raunchy low slung soul funk from the Opensouls outfit out of New Zealand. Capturing and indeed being one of the instigators of the antipodean funk sound, Opensouls along with bands like The Bamboos, Cooking on 3 Burners and The Tornadoes have all taken what was borne from the southern states of the US, and crafted their take on the important bits, i.e. raw soul and raw funk in healthy bite-sized nuggets.

This nasty-face funk grinder track has been out on various formats since its original release in 2006, it's tuff, it's punchy, it's down-tempo yet energetic, and it's got hard-as-nails DRUMS and Tyra Hammond screeching all over it just beautifully.

So why do you want this 45 after it's already been released on 45 by Freestyle back in 2006, well, this has an unreleased instrumental, that's why! Cue the ability to cut doubles, extend it, or just let it ride. 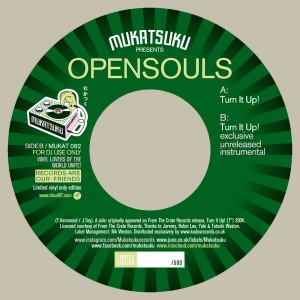