Outkast - ATLiens 25th Anniversary edition (Get On Down)

Outkast
ATLiens 25th Anniversary edition
(Get On Down)

It's time to start again on that list for Santa because this release is all you need. Get On Down pay homage to one of the most iconic releases in hip hop history and it's available just in time for Christmas. Do not say you haven't been warned. Do not sleep!

Originally released on August 27, 1996, ATLiens has been listed by several magazines and critics as one of the greatest hip-hop albums of all time. To commemorate the 25th Anniversary Get On Down is proud to offer an exclusive bundle including:

4 X LP set housed in a custom gatefold jacket with printed inner bags pressed on standard black vinyl including the vocal album and instrumental album which is being released commercially for the first time.

Exclusive to Get On Down Glow In The Dark big hole 45 featuring the single 'Elevators' b/w 'ATLiens' housed in a custom printed inner sleeve and miniature outer jacket mimicking the commercial 12" release.  This 45 will be limited to 3000 copies worldwide. 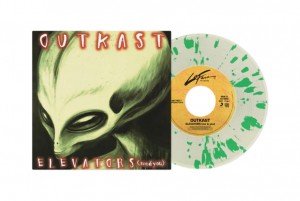