Pooky
A: Flippin' The Disco
B: Tux Redux
(Waxnerds)

Executive rap courtesy of the Waxnerds crew and it's first class business all the way on both sides. Every man in the crew stays freshly dipped for the latest in what we hope will be a long and purposeful output from them. ‘Flippin’ The Disco’ holds it’s own and then some. A dope Pooky edit of the classic Salsoul cut from Double Exposure with a little help from Thes One and Double K amounts to a disco bomb tailored to wipe the floor. On ‘Tux Redux’, Pooky furnishes PUTS with a stripped down backbeat and the rap duo put in work on a lo ride theme as they tag team to the funky cut in their own unique fashion. With just 250 pressed, the time to pre-order is now! 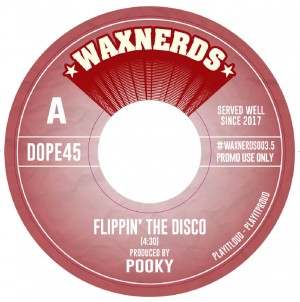