If you're familair with the DNA Edits series that's been bumrushing the best seller charts over the past few years you know that the mark is set high and on this latest release we're treated to that same high standard and attention to the craft we've come to expect. DNA Records present Puman's 'Bulang Beauty' a slice of Chinese reggae with a vibe ready Dub remix on the flip courtesy of DJ DSK. Sound the horns! This one has summer jam etched all over the grooves.

From DNA Records:
"DNA Records are proud to present 'Bulang Beauty' by Puman, a Chinese Reggae release, with a spaced-out Dub remix on the flip by DJ DSK. Experience a very unique sound infusion of Reggae and the ethnic tribes of Yunnan Province, China.

Puman are one of the originators of ‘Yunnan Reggae’, a style that has developed among the ethnic tribes in a mysterious rainforest region around China’s Southernmost borders with Lao and Myanmar. The band invokes the melodies, traditional instruments and most importantly the spirit of these traditions, mixed in with resonant and catchy original compositions and a danceable Reggae vibe.

Mixed and presented by UK Reggae legend Nick Mannasseh, the track ‘Bulang Beauty’ has these striking and enchanting roots at its centre. This traditional song of the Bulang people, driven by the grooves of the enigmatic and rarely recorded plucked instrument - Bulang Ding - and sung by a local elder with a choir of his students, was discovered by Puman on their travels around the area. The resulting track is an audacious mixture of elements creating an accessible but highly original sound that is surely Reggae but not like Reggae you’ve ever heard before.

DJ DSK, who spent two decades in Yunnan, linked Puman up with Nick Mannasseh, who on hearing the rough recording of the track was blown away and immediately agreed to work on the mixing/production. Therefore, DJ DSK’s subsequent dub edit completes a story that spans East and West and some of the most significant Reggae music people from each. – Sam Debell – Sea of Wood Records

Bulang Beauty was kindly licensed from Sea of Wood Records, China. Their expanding catalogue of unique Crossover Ethnic Chinese music continues to introduce the world to this exciting music scene. " 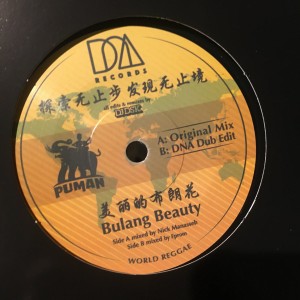