Unearthing gems from a distant age is part of the very fabric of DJ's of a certain mould and when we heard the intriguing tale of how this record came about we felt compelled to let you know, dear reader, the story behind Falcon Claw. We'll let DJ DSK from DNA Records give you the backround on 'Falcon Claw'.

There’s no doubt about it that the term “never stop digging” continues to hold it’s worth within the collectors world with discoveries still being made from creation done 40+ years ago. The latest find is just another example of stumbling onto something which just happens to be prime pickings for the rest of the world the hear and it’s got a great backstory to it as well!

On a return trip to Kunming, China I happened to be staying with my close friend Kris for a few days when he sadly received news of his father’s passing. After he returned from dealing with his father’s issues, I ended up staying with him again. One night we shared a few whiskeys together and Kris was reminiscing and telling me a few stories about his Father and his life. He played me a cassette of Falcon Claw that he had found in his Father’s house and I was blown away. I knew straight away that I would love to put it out on vinyl as it was such a strong track and a great way to honor Kris’s father. So, with Kris’s blessing we decided to release it to the world.

Housed in a striking full colour picture sleeve, it's time to pick up this 45 while stocks are still in supply. Head over the DJ DSK Bandcamp website to cop a set today. 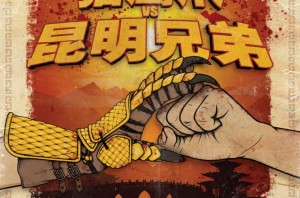