Savoir-Flair - Keep Holding On (Miles Away)

Savoir-Flair
Keep Holding On
(Miles Away)


I thought I was the smart cookie by  meticulously writing my letter to the main man in the North Pole and posting via insured and tracked postage in plenty of time. I never banked on Miles Away Records to literally turn my list on it's head. What am I to do now? Send a second letter in the hope that the elves have the foresight to change my request or simply hope that someone buys this Savoir-Flair 45 for me this Christmas? One thing's for sure, it will be mine, come hell or high water. Essential!

"Miles Away Records are proud to present our latest release Keep Holding On / You’re The Best by Savoir-Flair.

In 1982, during the hot Texas summer months Roger Boykin, John Miller and Cassandra Wright were working as session musicians at Precision Audio studios. They were put together to create soundtracks, jingles and idents for US TV commercials and, in what spare studio time the three of them had, would experiment with the studio equipment at their disposal - writing and developing what would become the Savoir-Flair sound.

In these secret, after-hours sessions the three would create a staggeringly good private press 80s modern soul album. A flawless collection of tracks with every one of them hitting hard. It would be released on Roger’s own label SoulTex Records with the group touring locally. Alas though, this was to be their only album as Savoir-Flair disbanded a year later. The impact this album however can still be felt today with the 45 and LP becoming highly sought after amongst modern soul collectors around the world.

Miles Away are pleased to present two of absolute stand-out tracks from this short lived group. Keep Holding On is a soulful-two-step-boogie-funk gem of a record with Cassandra Wright’s phenomenal vocals shining brightly throughout, sure-fire dancefloor killer. On the flip is You’re The Best, a beautiful flute-led arrangement that perfect underpins John Miller’s imposing vocal performance.

Re-mastered and cut by the mighty people at Timmion Records in Finland. " 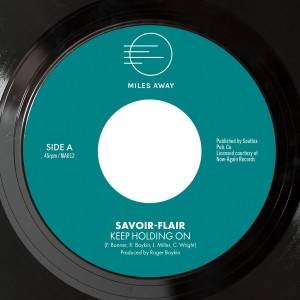