Back in the mid 90's I went to New York for a 'jazz conference' (which was rubbish!), but on that trip we hooked up with Desco Records (latterly Daptone) and sat in on a Sugarman 3 rehearsal which featured Adam Scone on organ, it was just a brilliant experience for a young(ish) DJ from Devon to be in New York for the first time and down in a basement somewhere in Manhatten listening to the raw boogaloo funk of Adam and co. I ended up putting the band on here in the UK a couple of times in the mid 90s, in fact their first show saw one of the biggest crowds we ever had, over 1500 people on a Wednesday night for an obscure NY band that no one had really heard of, happy days! Fast forward some years and Sugarman 3 had dissolved, I'm guessing because Neal Sugarman was concentrating more on Sharon Jones and running Daptone Records. So Adam Scone dropped off my radar a little, at least musically, but then he reappeared with The Scone Cash Players in 2008 and released music on labels like Flamingo Time, OrganTone, Spasibo and now they are back 'home' on Daptone with this 45. 'Canned Champagne' is 100% raw funk, very much a 'Desco' track, drenched in reverb, wide open, gritty swirling organ, pucnhy trumpet and featuring raw vocals from Jason Joshua. I for one are counting the days to when I get the chance to go see The Scone Cash Players play live, hurry up already. 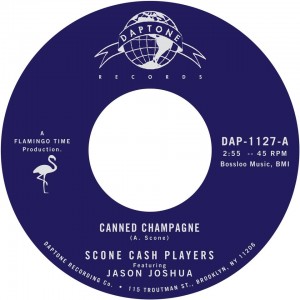