Shirley Finney
A: Pray Again
B: Give Your Best To The Master
(Rain&Shine)

Lovingly remastered from the original Savoy reel-to-reel tapes and now available for the whole world to own and cherish comes this super rare gospel soul double-sider from Shirley Finney that's now available from Rain&Shine Records in New Zealand.

Ms. Finney's debut LP entitled "Pray Again" will bankrupt even the most affluent collector but thanks to Rain&Shine two of the most memorable cuts from that LP are featured on this release.

Here's some words from Rain&Shine Records:

"When we tracked down Shirley Finney she was so ecstatic about the interest in her music from 40 years ago that she screamed! Shirley moved to Atlanta, GA from her hometown of Akron, Ohio, where Savoy asked her to record a 'contemporary Gospel LP'. Her brother (Henry) was part of the band, and had previously played with Howie Hewitt (Shalamar) and James Ingram. He started to lay down some rifts inspired by Parliament. Shirley at the time didn't know who Parliament were as she rarely listened to secular music. However, she was feeling it....."My music is not your Grandma's gospel" said Shirley, and she was right!

Shirley Finney's 1979 debut album "Pray Again" has recently become something of a sought-after set amongst collectors of disco-era gospel soul. Original copies of the LP are expensive and hard to come by, so Rain & Shine has decided to stick two of the set's most admired tracks on one 7-inch single. "Pray Again" is rather wonderful, with Finney delivering a strong, heartfelt vocal above a backing track rich in sustained organ chords, jangling pianos and clipped guitars. "Give Your Best To The Master", meanwhile, is a more up-tempo and stomping gospel-disco affair that benefits greatly from some stellar choral backing vocals. It sounds like the sort of thing that Tony Humphries may have championed at Zanzibar in New Jersey back in the day." 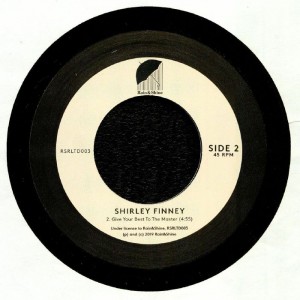