SimfOnyx
A: Magenta Skyline
B: The Unresolved
(Delights)

If you think that Delights label boss Markey Funk had retired and had given up on the music business prematurely than you don't know or you're not yet familair with the driving force behind this curious independant record label. Markey will be the first one to agree with the fact that he's only getting started on this journey and there's so many artists and so much new music to share with the wider world.

For this latest release, he teams up with Haifa's Shuzin and between them they explore, stretch and bend the musical spectrum and mould a double headed beast that will prove to be untameable once it is let loose on the public. Both 'Magenta Skyline' and 'The Unresolved' find us deep in the cinematic pysch funk trenches. It's a place that is dark, a place where no light lands and a place that leaves us confused and bewildered and disorientated. The music makers would have it no other way.

Strictly limited to 300 copies, head to Juno or Bandcamp after the stream to secure your copy before it sells out. 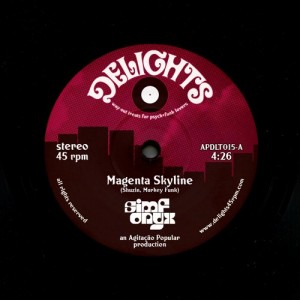