Welcome to the wonderful world of Slick Walk and Sneaky who take you on an astrological trip for the ages thanks to some so-so def cutting and scratching on two turnables and some on point instrumentation. Let's back up a smidge before we wax lyrical on this release. Label boss Oonops has been on the airwaves for eight years and his celebrated Brooklyn Radio Show recently clocked their 150th episode. To coincide with the 150th episode he invited some artists to record some tracks for his for Oonops Drops label. Step forward Slick Walk (Merse & DJ Robert Smith) and Fingathing's Sneaky who take on Moondog's 'Bird's Lament' and go to town with the original track delivering a stripped down hip hop jam. If you're familiar with DJ Robert Smith and Sneaky's live lockdown video jams you know what's on offer here.  Two turntables and a funky cello!On the flip, South Korean producer Avantgarde Vak takes the listener on a guaranteed head nodder on 'Keep Ya Eyes Up'. If that's not enough Japanese producer Toshiyuki Sasaki weighs in with four drum breaks to make this an essential DJ tool for the jugglers.

Out now on Oonops Drops. 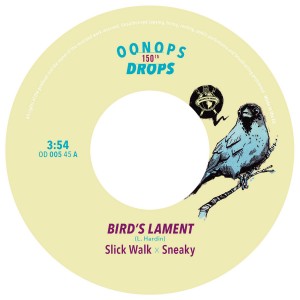