Back in simpler times, a curious thing happened to saxophonist Idris Rahman and trumpeter Robin Hopcraft and a chance meeting on the streets of London with Ms. Margaret Anne Lak as she was then known. And well, without getting into the nitty gritty of it, a lesser known fact is that they gave Mystic Meg the idea to be Mystic Meg. She in turn proclaimed them to be Soothsayers and well, they began on their journey of discovery writing fabulous song compositions to entertain all who would travel distances to hear them kick out the jams.

Fast forward to many decades later, to modern times and intern talent scouts at Wah Wah 45s Records caught wind of all the commotion while reading the dailys over breakfast at their local cafe. It was an article in which Meg was talking about the origins of her name and they became curious about this mythical band. Before too long they met up with the big wigs at the label, struck up a wonderful mutual appreciation and the music was pressed on to wax for all to enjoy. The latest being a triumphant cover of 'Natural Mystic' which is dedicated to one Margaret Anne Lak.

Now I'm no mind reader but I reckon this fun little 45 will be available from the Soothsayers Bandcamp page in the not too distant future. We urge you to discover what the world has been waiting for. We predict global domination! https://soothsayers.bandcamp.com/ 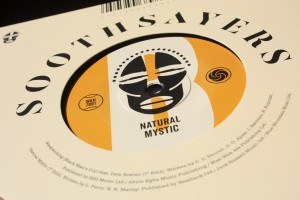