Acid Jazz return once more and now sport in their war chest the heavy, heavy monster sound brought to you by none other than Earl 16 who teams up with Soul Revivors on 'Got To Live'. For their follow up to last year's 'Harder' which featured vocalist Ernest Ranglin, the band document the current social and political landscape with 'Got To Live'  with a strong message of yearning and hope for the future. If you have even a passing interest in reggae music, this track is guaranteed to bring a twinkle to even the driest pair of eyes and a rhythmic side step to even the the most rigid pair of hips.

"Earl started his recording career in 1975 as lead vocalist for the Flaming Phonics, a group he formed while still a schoolboy in Kingston, Jamaica. Earl went on to record for Lee Perry, Augustus Pablo, Derrick Harriott, Joe Gibbs and Roy Cousins, before moving to the London in 1985. Here he worked with Mad Professor amongst others, but also stepped outside of reggae to work with Leftfield, who he still tours with.Soul Revivers' Nick Manasseh has recorded with Earl for thirty years now, while David Hill has known him for fifteen years – Sixteen being a regular crowd-pleasing guest at his long-running Rootikal dance in London. Got to Live features Adrian McKenzie on the drum kit, with Jonah Dan on repeater drum and Spry on percussion. Add a three-part horns section and Manasseh's artful live-desk-mixdown, and this majestic tune is guaranteed to drop heavy.The flip holds Living Version, a instrumental track that is less about the dubwise, but is built for MCs."

Head to the Soul Revivors Bandcamp after the stream to secure your copy today. 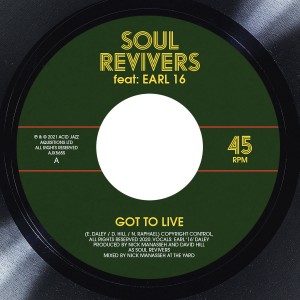