Producer of considerable note from where we're standing is Amsterdam based Noam AKA Soul Supreme who's production prowess first caught the attention of  Tim Zawada at his Star Creature HQ. It was through hearing these releases and last year's debut on his own Soul Supreme imprint which shone a light on the work of Tip, Phife and Ali that confirmed for us this producer's growing reputation.

For this his second release on the label, he delves into the archives of the late great MF DOOM / Madvillian for two tribute cuts that serve to remind us what we appreciate about this artist's body of work. 'Huit Octobre 1971' is by French jazz-fusionists Cortex. The track was sampled on MF DOOM's 'One Beer' but what the producer brings to the table is something so vibrant and so fresh it demands your attention form the very get-go. On 'Raid'  Soul Supreme reimagines the classic Madvillain track featuring the hook from 'America Latina' by Osmar Milito e Quarteto Forma. Soul Supreme has delivered with another sureshot release to add to his canon. Available now through the artist's Bandcamp page. 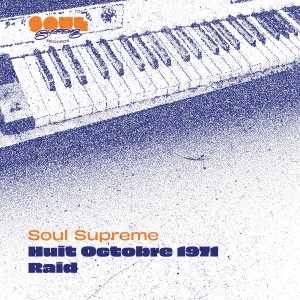