The Sunlight Square Latin Combo is the brainchild of Claudio Passavanti and back in 2010 he assembled a crew of Latin musicians to record a salsa version of the joyous summertime jam 'I Believe in Miracles'. The track was originally  written by Bobby Taylor and Mark Capanni and was first released by The Jackson Sisters in 1972. It has become a favourite of DJs worldwide from it's initial release date. Fast forward to 2010 for Sunlight Square Latin Combo's turn at production. Passavanti and Co.waste no time and proceed to deliver a Latin-charged heat rock that will prove to be the perfect Latin lockdown tonic and an essential DJ tool for the bars and clubs when they eventually reopen. For the tenth anniversary of the release Sunlight Square have decided to press up a limited run of 300. For those who missed the release the first time around now's your chance to own this essential version. Listen to the stream below then head to JUNO for your copy today. 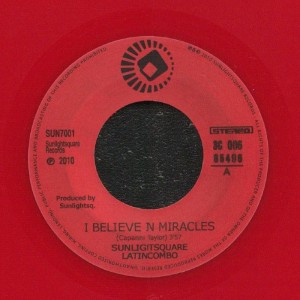