When Panasonic relaunched the Technics SL1200 turntable in 2016, first came the GAE, then the GR that both came with hefty price tags, and which were primarily aimed at the high-end hi-fi market. Consequently the mixture of joy and anger and confusion that circulated the DJ world was palpable. No 'normal' DJ could afford a set of these decks, and why would you drop that kind of dough when you can still get a pair of original 1200's in almost mint condition for less than the price of 1 of the new models? I wouldn't, even if I could afford it. But now comes the Mk7, and this one IS aimed at DJs. Sure it'll be expensive but within the realms of affordability.

The SL-1200MK7 is the newest model of the SL-1200 Series. For the development of this model, all that modern day DJs need and want were reviewed from the ground up. At the drive section of the MK7 is a coreless direct drive motor. While achieving both stable rotation and powerful torque, this has successfully eliminated a rotation irregularity called cogging, which was the only drawback of the direct drive system. As a result, sound quality was further improved. The pitch control incorporates digital control to achieve improved tracking performance and accuracy. The buttons and tonearm are black to complete the all-black design, and the LED light can be set to illuminate in red or blue. A reverse play function has been added to expand the breadth of DJ play style. With those features and functions, the MK7 aims to set a new standard for DJ turntables.
[source: Panasonic]

So, if you're going to launch a turntable, you need a DJ, right? So Technics have shown great wisdom and style in securing the skills of the Japanese vinyl alchemist DJ Koco to feature in their new promotional video. Cutting up 45s using the new Mk7 feature - reverse play - and doing it with his typical masterful flair that generally leaves everyone, and I mean everyone, doffing their caps and shouting 'daaaaaaamn'. What Koco can do with 2 turntables and 2 45s is literally magic, he's the best, and maybe never to be bettered.

Time to start saving for a pair of Mk7s!

Check out the new film here... 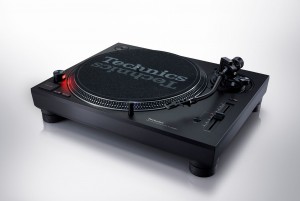