The Allergies '2 Much' (Jalapeno)

These guys could easily claim the title of 'hardest working' people on the scene at the moment, The Allergies are firing on all four what with a relentless stream of releases, gigging all over the place, recording their podcast and mixtapes...what's next? Well, this 45 is next, '2 Much!'  which is also the name of their current LIVE tour with Andy Cooper, Marietta Smith on lead vocals (from London-based funk outfit, Smith & The Honey Badgers) and Mr. Woodnote on sax (who tours the world with Dub FX as well as other projects with rappers and singers). This release is a special one off single, Moneyshot says "2 Much came together round my house the last time Andy was over. A case of "What's that loop you're working on?" and then I could hear him crafting lyrics in the spare room all night. He says it's his fastest verse yet". And boy oh boy what a goove, naturally funky and beautifully complex, full of 'VIBES'! Head to the flip and Andy celebrates the 45 single (we like that!). Moneyshot continues..."The b-side of 2 Much was whipped up as Andy was over on our last tour too. We got the boom bap bits together and we all came up with the 7" theme. Then he dug into the culture and we picked out some names to check, and Andy started pulling out all these dope 45 references to cut up. We handed scratch duties to the German turntablist DJ Robert Smith as his stuff is just so dope right now. He smashed the cuts at the end. What a dude".

Definitely a 45 to nab as soon as it's released, and word on the vine says it's the first of a stream of 7" nuggets from The Allergies. They are not sitting around, no, they are working it baby! 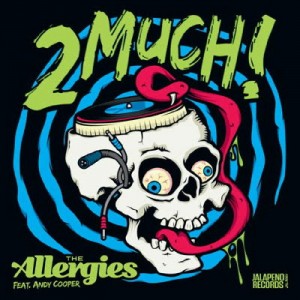 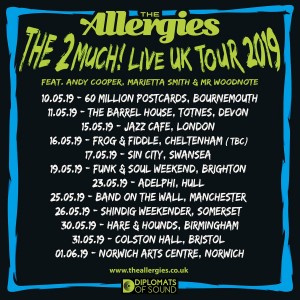