The Allergies 'Entitled To That' (Jalapeno)

The Allergies
'Entitled To That' / 'Get Down On You'
(Jalapeno)

Matches, heaven, and where they are made are entirely appropriate when you consider the creative pairing of DJs Moneyshot and Rackabeat and what fruits have been produced from their union. Meeting at Chai Wallahs a couple years back, Adam and Roy recognised in each other a shared passion and shared vibe, so it made sense to get into the studio and cook up some beats. Since then they have been very productive, releasing a load of singles, their first album 'As We Do Our Thing' and have just dropped their 'difficult' 2nd album - Push On. Except that old rock-ism doesn't apply, the new LP is dope as hell, and this 45 is the second single to be taken from it. The A side 'Entitled to That' is a full-on Northern Soul stomper with a super vocal performance from LA based Honey Larochelle and some backing vocal 'heys' from Andy Cooper! Perfectly capturing the energy that these guys throw down in DJ sets, that being uptempo major-chord smile-on-your-face dance-floor gold, to put it bluntly. Flip over for 'Get Down On You' which is a fantastic bump-n-grind disco nugget (I do seem to love all Allergies B-Sides, as Adam has remarked to me!). All in all, a super-solid single taken from the new LP and one that will live in your play box for quite some time.

The Allergies have been ramping up their touring schedule this year, so if you haven't caught them out in a club or festival field yet, then where have you been?! 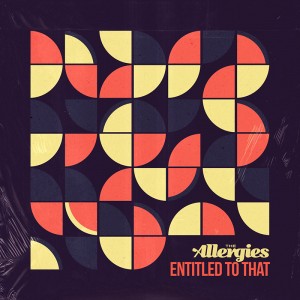