Ahhh, when the meeting of minds produces something greater than the sum of the parts, this is definitely one of those occasions. Bristolian beatmasters (and lovely chaps) The Allergies join forces with the mighty Ugly Duckling's Andy Cooper (also a lovely chap) to produce the kind of hip hop that NEVER went out of fashion even though mainstream hip hop might try to tell you so. The A side joint 'Rock Rock' most certainly comes off like 'Alphabet Aerobics' with Andy dropping a double speed rap full of humour, lyrical gymnastics and a fair few nods to ATCQ and others. Set to a jump up, funked up backing by Andy who co-produced with Moneyshot and Rackabeat who are masters at pitching beats to a dancefloor. Meanwhile on the flip (and the favourite of this reviewer) is the golden era vibe of 'Blast Off'. Absolutely wonderful musical backing for Andy to lay down a beat hugging funky delivery. It's jazzy, soulful, Moneyshot's deft cuts throughout and expertly arranged. Most definitely music for a mature BBoy (sorry Matt, it's just the right thing to say!). An essential 45 release from The Allergies which we predict will be gracing decks from Bristol to Boston, Sydney to San Francisco and all points between. 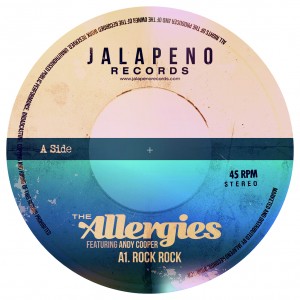 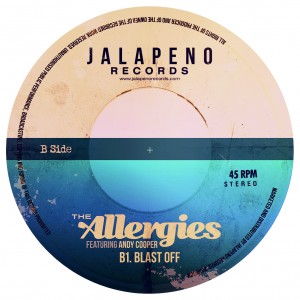