Well, once again it's all down to Fraternity Music Group to pave the way in the electro/hip hop revival game as they take on another monumental record from the era that they continue to champion. Fraternity have a knack for cherry-picking essential cuts that you should own. Originally released on Meno-Vision Records, 'Yum Yum (Eat Em Up)' by The Beat Box Boys features that upfront mid-80's drum machine that was so prevalant at the time. With an insatiable Jolly Green Giant-like vocal sample to usher in the track, it's fluttering layered synth waves alongside said drum machine patterns make for a composition that could very well accompany the best horror/slasher 80's movie you've never seen. The edit is provided by Fraternity go-to producer Undercover Brother.

On the flip is Teen Rock's 'Set Me Free' that continues the theme of 80's motion picture drama feel with an even tougher drum pattern and  incessant synth action before the vocal drops that transport the listener back. Essential business from start to finish, make no bones about it and one that DJ's will be keen to play out. Again, the Latin Rascals & Bobby Orlando production team are responsible for this cut, which gets the Undercover Brother edit treatment. Another Fraternity sureshot!

Available from Juno Records but be warned as this is bound to fly off the shelves. Buy NOW. 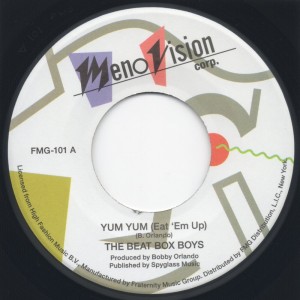