The Boys In The Band 'Pain' (Mukatsuku)

A little bit of audio detective work from Mukatsuku here as they dig into the tapes to unearth a version of the track 'Pain' in its original form. Nik at Mukatsuku explains "Wayne Perry & Randy Mcnutt decided to record a version of Pain in a power Soul Rock mode which was all the rage in Cincinnati, Ohio at the time of the recording around 1973. The Boys In The Band version features Wayne singing solo but was never released. What was released was the Little Flint version (a name that Wayne had chosen as an alto ego guise ) and assisted with that version by an uncredited vocalist from Alaska singing on top of the same rhythm track."

One immediately thinks about how many other versions of tracks are out there? I'll tell you, BILLIONS of them are sat on reel-to-reel tapes in studios, attics and basements all over the world! And it's not always the best version of a song that makes the final cut for release as the 'best' is and has always been a subjective term that artists, producers, label managers and even accountants will argue over. Yet since the rise of the CD where the majors could re-sell their whole catalogues all over again on a very cheap-to-produce format, the possibility of extended collections, alternative takes etc became easier and more profitable to reproduce. So an endless supply of 'remastered', 'uncut' and 'complete recordings of...' emerged. Of course, this is generally great for fans of music in general and for particular artists where you might be possessed by hearing/owning everything they have ever laid down in the studio. And for DJs, alternate takes of classic dancefloor bombs from the like of James Brown are ALWAYS welcomed to surprise and delight the dancefloor in equal measure.

But anyways, Mukatsuku have done exactly this, on a 45, and what we get is a slicker B side that made the release, and a rawer A side as the band meant it to be. Kinda northern soul, kinda rock with shades of jazz, and most notably a killer Hammond solo. I'm not sure what to call it, but who cares, it's a quality 45. 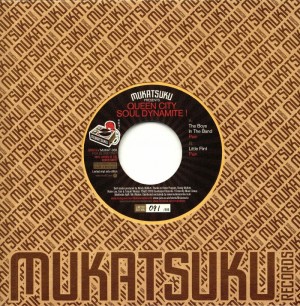