We asked and they duly listened. Heat Rock Records have caved under enormous pressure and have made the clever decision to reissue their first ever release. Chicago vibe ambassadors Altered Tapes treat the listener to  the release that initially brought this label to our attention. The producer tackles The Emotion’s classic Soul cut 'Blind Alley'. He adds a boombap flair, brings the horns to the front, with enough bump for the dancefloor. Phoreyz + Brisk (Las Vegas) focus on one of the most influential Hip-Hop tracks to sample 'Blind Alley' with their remix of Kane's  'Ain’t No Half Steppin'. A golden era jam that we never tire of hearing but the gang flip it so lovely that it confuses our little brain cells on whether this trumps the original version. They have managed to craft a club friendly drumbeata cheat sheet 45 that enables the DJ to go straight to the heart and soul of each individual on the dancefloor with a dope dopamine hit that almost causes the head to come clean off such, is the ferocity of the neck snappin' action.

Out now on Heat Rock Records, promptly head on over to Juno Records for your copies, make yourself a pot of tea and wait for this party rockin' 45 to rock up to your crib. In the meantime, bang this digital stream in your box until that time.  Purchase HERE. 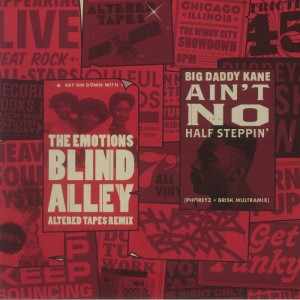