The Haggis Horns 'Take It Back' (Haggis Records)

The Haggis Horns will release their fourth studio album in September 2017 and as a little teaser, they drop a summer single worldwide on June 9th, a feel good bouncing hip-hop/funk jam featuring guest UK MC/rapper Doc Brown. Think back to the dawn of hip-hop in the early 1980s when the first rap singles featured the Sugarhill Records house band laying down heavy funk grooves for MCs like The Furious Five and Treacherous 3 and you get the flavour. No-nonsense party hip-hop/funk for b-boys, soul sisters and funk brothers! And keeping with that old school flavour, it will come with a limited edition 7 vinyl pressing alongside the digital single and feature an instrumental version on the b-side with the Horns cutting loose on the solos. Fantastic summery hip hop funk, expertly played by the lads with Doc laying down a tight rap, one for the playbox for sure. 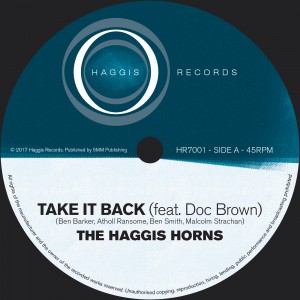