Acid Jazz’s first release of 2020 is The Kevin Fingier Collective's 'Don’t Wanna Cry No More' and we literally have the windows wide open and are shouting this news from the top of our voices in glorious unison! The supremely talented Kevin Fingier has cherry-picked the finest musicians to form The Kevin Fingier Collective and they have signed on the dotted line at Acid Jazz to bring you the fruits of their creative labour via this brand new subsidiary Fingier Records. And we're so happy for that fact. For the first release they have recruited the mighty Gerri Granger to lend a hand on vocals and bring his voice to a new legion of fans. Please don't come crying to us when they sell out and you failed to nab yourself a copy. Head over to Juno to preorder the lead track today.

Here's what they had to say at Acid Jazz HQ:

The relationship between Acid Jazz and this prolific young producer started with his early Reggae band Los Aggrotones, with whom he released their last album Right Now in 2019. He has also produced and worked with many Reggae artists from the 60s such as Derrick Harriott, Pat Kelly, The Cimarons and Cornell Campbell to name just a few.

After many years DJing and promoting Soul & Mod culture in Argentina, the co-founder of the Buenos Aires Soul Club decided to give a twist to his versatile production career and start to produce Soul and R&B recordings.

To achieve this, he gathered together a house band called The Kevin Fingier Collective and experimented with recording techniques used fifty years ago to get an analogue sound that’ll take you to straight to the 60s.

For the first single Kevin brought back the legendary Northern Soul singer Gerri Granger, to sing on the A-side track Don’t Wanna Cry No More – a Soul/Funk tune with a huge R&B influence. On the flip side there’s a killer Mod Jazz instrumental called Sunglasses After Dark Part 1." 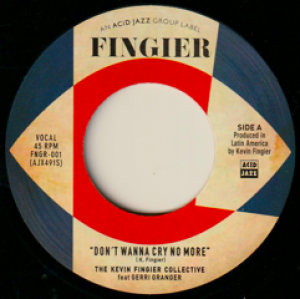