The Perfect Circle 'The Hands Of Time' (Dynamite Cuts)

Well, for this reviewer, this official release of The Perfect Circle is oh so welcome because it's a very personal record for me, it was formative in many ways, setting the scene in my early years as a DJ/Promoter, being part of the bedrock of a friendship, igniting the hunger for rare original records, the list goes on. How can one record be so many things? Often they are and for different people, they are different things, but the unifying theme here on 'The Hands Of Time' is that it's a monster song that no one can deny. Taken from the rare 1977 self-titled LP that had a bonkers cover design, a mono trippy hand made creation that maybe really didn't represent the slick yet raw, immense jazz-funk goodness inside, it's an album that any self-respecting digger needs to own whether that be an original (ideally!) or a reissue. Various tracks from the LP were just massive back in the rare groove days of UK club culture in the late 80s/early 90s, so after all these years to finally have an official and lovingly reissued 45 from Dynamite Cuts is just brilliant. Just buy it ;)

Some years ago I was asked to write about some music that had an impact on my life, this record was that focus, here is that text:

Gaz kindly asked me to write a piece about a record in the collection recently, which I did, but I had replicated one that had already been done before, should have checked I guess! The focus of that story was about the journey a piece of music can take you on, how far that might be and of the connections and impact that a humble record can make. It was ‘Acid Jazz Vol. 1’ on BGP by the way.

So take 2, and I’ll keep to the sentiment of the other piece and focus on the way music unites. Way back in my early days as a promoter/DJ in ’94, I used to call up Soul Jazz Records in London every Tuesday morning to buy as many records as I could to drop the following night at Jelly Jazz in Plymouth. On the other end of the phone a young chap called Chris Goss who quickly became my go-to guy to ask for, he got me sussed quickly and was able to play breaks and grooves down the phone that I would invariably buy. He must have sold me thousands of pounds worth of records over those first few months! Naturally, I would tell him stories of our midweek club night deep into the SW, and a DJ booking for Chris soon followed. I wasn’t that far out of art college at this time so was living in somewhat modest conditions, i.e. a tiny room in a shared house with loads of muso’s and hippies, and Chris got to stay on some cushions in a rough-as-you-like basement lounge. But anyway, we didn’t care about such conditions, youth was still on our side!

Typically, the club that night was rammed to the rafters with a bonkers mad-for-it collection of hippies, ravers, musicians and students. We enjoyed that rare commodity of an audience that just lapped up everything and anything you threw at them. This was obviously years before the internet so obscure American funk etc etc etc was just not so easily accessible, so those calls to Soul Jazz each week were invaluable. But the best way to discover music was, of course, to hear it in a club, so when Chris and a few others like Bunny from Acid Jazz came down with bags of records we’d never seen, Wednesday nights were always punctuated with mindblowing moments. One of the comments we most heard from punters at the time was something along the lines of “damn, what is this music? Where the hell do you get it?”, I pretty much said the same myself to those early guest DJs we had! Chris dropped a killer set that night with hip hop, jazz, jazz-rock etc, but when he dropped ‘The Hands Of Time’, it was one of THOSE moments. Both myself and fellow Jelly resident DJ Griff flew up to the decks to find out what it was before rejoining the packed dancefloor to literally go nuts. What a monster of a track, fusing the best of jazz, funk and disco into a relentless groove punctuated with stuttering breaks and spaced out instrumentation, a phenomenal track from a killer LP. (Sometimes, don’t you wish you could hear something for the first time again?) Of course, I had to obtain the record and eventually procured an original copy, signed by the main man George Semper too for added niceness!

Chris pretty much cemented himself as a regular with that drop and set and fast became our favourite guest DJ and played almost every month for years and years, as well as becoming great family friends. Any old school Jelly Jazz fans will well know the regular ‘Goose Fever’ sessions, where Chris would play all night for a few weeks if I was away from town. These days he has of course gone on to run the world’s biggest D&B label, Hospital Records, but for me, he’ll always be the guy that dropped ‘The Hands of Time’! That and our Tuesday morning record purchasing created a lot more than the sum of their parts, a connection through music that became a fantastic friendship and shared passion for records, especially for things like The Perfect Circle, Brian Auger and the like, we both appreciate a damn good red wine too!

I love the way any record will have its immediate story, but you can always consider its influence further and be surprised at what direction it ultimately leads you in. Chris and I get to DJ together on the odd rare occasion these days, so next time, through these hands of time, I’ll urge him to drop it again, it will be a perfect circle. 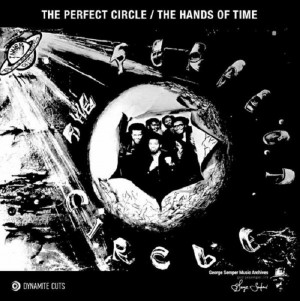