We have come to expect nothing but dancefloor heat from The Rebel simply because for past ventures he has raised the bar to Olympic level. On 'Soul Power' he takes a bonafide classic and works this cut to death, rearranging the key elements to breath new life into the track that even Mister Please Please himself would surely approve of. I mean, we're talking' a twisted-hot-sauce-disco flavoured edit that begs a play on a big system (with a beast of a funk motor). We have to hand it to The Rebel and give thanks to the producer for keeping our dancefloors busy. This track will do just that. On the flip entitled 'Black Queen', it's the turn of producer Muthazy who delivers a sanctified sizzler of a disco space bomb that fits snugly in any DJ Box in the galaxy. Funky disco feel good factor vibes to rival anything produced in the cosmos.

Both tracks are available from the mighty Lego Edit label via Juno. 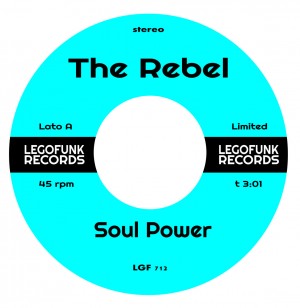