As we turn a corner and look forward to another year of good music we ask you to divert your eyes and ears to a curious spot on the globe where you're likely to find some like minded individuals that have on their books a producer who is no stranger to us here at 45 Live towers. The label is Agogo Records who operate out of Hannover in Germany and the artist we feature today is Oonops who in turn shines a light on a clutch of recording artists who have signed for Agogo on this bumper forty-five release. Andy Cooper leaves all competitors for dust as he flexes his vocab abs like only he can. Production is handled by The Ruffcats on the original production but Slick Walk is tasked here with updating the track for 2021. Japan's 6th Generation handles production on the flip with a tasty jazz cool out vibe that has us hankering for the summer ahead. If that's not enough the final track in this bumper 45 is from German producer Clockwerk and their collaboration with jazz combo Birdmoves on 'Portisheadshop'. They deliver a dusty beat driven track for the head nodders.

Here's what Oonops has to say:

"After my 100th jubilee episode on Brooklyn Radio and the accompanying »Oonops Drops«-45 i am back with this new single. We gonna start with a funky rap-tune by The Ruffcats featuring Andy Cooper on the microphone. Slick Walk remixed »On The Run« and added hard-hitting drums and on-point-scratches to it and produced a sureshot party starter. On the flip you'll find two jazzy instrumental joints. First one is by japanese beatproducer 6th Generation and his instrumental 7"- edit of »Remember Us«. The last track is by German fingerdrumming master and beatgrinder xtraordinaire Clockwerk who works out a jazzy beats number together with Hannover based jazz combo Birdmoves on the instruments."

Head over the the Oonops Bandcamp page today and bag yourself doubles while you still can. 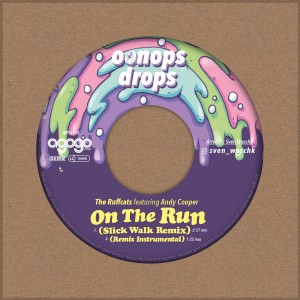