45 Live's Supreme La Rock wrote an article for Cosmo Baker's weekly 'Breakbeat Tuesday' column back in 2011. It makes for an interesting read.

I’ve been so busy lately with travel and music and life that the writing on this site’s taken a backseat for a moment. Relax. Refocus. Regroup. Thankfully I have a lot of buddies that are always down to help share their stories (and record collections) with me and you. So today I’m pleased to have my man Supreme La Rock come through and bless us with an ill gem. For those that don’t know, Seattle based Preme has been in the DJ and rare record collecting game since before I can remember, and is one of the illest dudes I know in the game. He’s one of those guys that makes you hate your own record collection. Hit up Preme on his Twitter for more jewels from the brother. Okay, so let’s get to it…

Welcome to yet another edition of “Breakbeat” Tuesday.  Before we get started, I just want to say that this is a true honor that I was even requested as the special guest for this weeks installation. As with anything I do I try to be as thorough as possible. So, for this one I made a lot of phone calls, emails and research trying to find out exactly what I could about this record. The record in which I speak of is none other than “Do It Your Way” aka: The Smiley Face record by Chuck Colbert & Rory O.  I’ll be honest in saying that the record over all is not that great in my opinion but the first seconds of the opening drum break is pure delight.  The first time I ever heard this break was on Marley Marls Juice Crew record The Symphony. I also, remember this break used for Kool G Rap & Polo “Money In The Bank”

I picked this record to feature because of it’s odd rare novelty. It was never officially released or for sale. It was a promo only item given out by the city of Milwaukee to promote their “Summerfest” concert series. I contacted them to see what information they could give me on it. Oddly enough they knew nothing of it!

So who exactly was responsible for discovering this break? I had a friend that interned at the NYC studio where Marley did all his recording at the time. He told me that all the rappers used to bring Marley the records they wanted to use and he would sample and program them because he knew how to work the equipment. Well I shot the diabolical Biz Markie a phone call to get to the bottom of this! Biz recalls:

“I discovered the record and brought it to Marley to sample” (My friend was right.) So once again we have a rare oddball record that Biz Markie discovered adding to his hip hop legacy even more…”

The thing is not too long after the Symphony was out I was over at DJ Shadows place and he asked if I had the “Smiley Face” record. I had no idea what he was talking about and he told me it’s the breakbeat they used on the Symphony and he showed me the record. He had stumbled up on it by luck while out digging for 45’s… So it was solidifed. I knew that there was a 45 called the “Smiley Face” record and the break from the Symphony was on it. My hunt for copies was on… What I didn’t know is who the artist was or what label it was on. I called Soulman from Philly to see if he was up on this record and true indeed he was. Only because Diamond D was searching for it and asked him if he had a copy. Soulman did obtain a copy in a trade with another dealer not to long afterwards. (This was in the early/mid 90’s).

DJ/Collector Beni B from ABB records called me asking did I know about a “Smiley Face” record. Yep, I sure did. I just didn’t have a copy or even know who the actual artist was or what label it was on. None of those factors stopped me from looking. I finally gave up after ten years of searching and only two people I knew personally that owned a copy. DJ Shadow and Soulman.

It was brought back to my attention when Soulman sent me a copy of one of his mix cds and he was wearing a t shirt with the “Smiley Face” on it. I hit him up trying to pry his copy away from him and that was not happening! So there I was back on my beat mission… During the research I was doing for this write up I recalled that Large Pro used it for the Kool G Rap joint so I hit him up to see where he obtained his copy, how he knew about and what he could tell me about it. His exact words were:

So, wow Large Pro didn’t even have the record…. I hit Pete Rock up after talking to Large but I got a big fat zero response out of him. I obtained my copy around 2004 by placing an ad on Milwaukee’s Craigslist stating I was looking for this record and I posted a picture of it. One dealer stepped forward and had a copy I got on the cheap. He said he thought he had more but turned out he didn’t. I’ve seen three copies on ebay since then selling for as high as $600!

I called Diamond D this morning to ask him about it since he was the one that originally was asking Soulman for a copy. He told me he has never found one and he knew of it from Mark the 45 King asking him if he had it. I know it was a topic on soulstrut in the past and after seeing the article someone went out that same day and found a copy for $3. Well it’s the year 2011 now and breakbeats aren’t important to some as they were in the mid 90’s and the internet gives you almost all the information you need on things. You can youtube this record and it pops right on up. When Cosmo asked if I’d do a guest column for breakbeat Tuesday I already knew exactly what record I was going to choose. I just had to track people down and see what I could find out about it which isn’t much. I found out it’s rare. Who knows how many were even pressed up? You’re mostly likely to find it in Milwaukee if at all. I know of 5 people personally that actually own a copy. Sharing is caring and I offer to you today none other than “Do It Your Way” aka: The Smiley Face record. 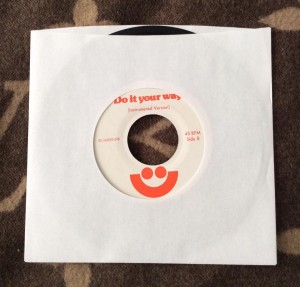