The Sorcerers - In Pursuit Of Shai Hulud (ATA)

The Sorcerers
In Pursuit Of Shai Hulud
(ATA)

From the very epicentre of the Ethiojazz resurgence Leeds via the hot desert planet Arrakis comes this funky 45 from The Sorcerers entitled ‘In Pursuit Of Shai Hulud’. Not resting on their self-titled debut from 2015, this latest release plants the band very much in the conscience of lovers of the scene. Ethiojazz tributes to the pursuit of sandworms is a niche subject in the world of recorded music I’ll grant you that and this track certainly towers above almost everything else being released today. There’s something enigmatic about this giant creepy-crawly that has inspired this band of men on a mission to pen a tale of pursuit that is by far trivial. The soundtrack to their '...Pursuit of Shai Hulud' is now available for all to endulge in thanks to the kind folks at ATA Records who’ve gone to the trouble of pressing it up on a loud 45. My advice to is to let this one meander through the ear canals and enjoy the ride.

On the flip, the band left the planet Arrakis and crash landed slap bang on the offices of Yorkshire Film & Television. They all sustained heavy injuries but it wasn't all doom and gloom. The original reel of  ‘The Anderson Spectrum’, which was originally recorded by the Yorkshire Film & Television Orchestra, came crashing through the windscreen upon impact and The Sorcerers saw this as a sign. As soon as they were all fully recovered they went back into the studio to record their version (renaming it ‘The Viking Of 5th Avenue’) which got a heavy co-sign from none other than Mulatu Astatke. Pour yourself a cup of Tetley’s and let this one sink in. 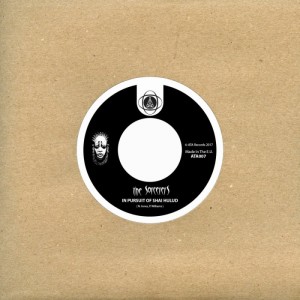