Thelonious Beats - Do What You Gotta Do (Galaxy Sound Company)

The fact that we have never featured any Galaxy Sound Company releases in our reviews section up to this point has me stumped. I mean, we’re big supporters of this Detroit based label and have been for some time now so how come they’ve managed to slip through the net? It’s time to address that right now. The inhouse production boy wonder Thelonious Beats (BlackCash & Theo) handles production and makes a point of treating each track with the sonic reverence it deserves. Each release becomes nearly as sought after as the original. To offer an example, the debut Galaxy Sound Company forty-five () is highly sought after and now commands a lofty sum on certain online marketplace sites.

Today we review a track that most digger’s have scribbled on the first page of their wants list notepad and if they don’t, then they’re sure to remedy that once they are made aware or reminded of the song thanks to this feature. Eddie Drennon & BBS Unlimited’s moody mid tempo delight ‘Do What You Gotta Do’ lifted from the 1974 LP ‘Collage’ is the focus on this release. Cool V rapping lyrical over the instrumental on Biz’s ‘For My Boys’ may be the introduction to this track for some but of course the infectious soaring strings on the loop tell only half the story. Cosy but funky keyboard stabs from Morris Berry, ethereal vocal stylings from Esther Williams and those aforementioned other worldly meandering strings are all perfectly arranged by Mr. Drennon and make for a classic rare groove cut. Follow Galaxy Sound Company on Bandcamp to be alerted to when this record drops which we believe will be early 2020. 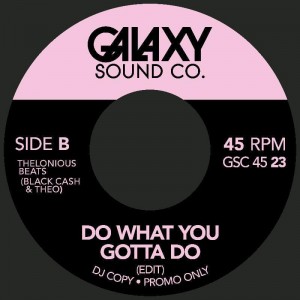