Tim Maia
A: What You Want To Bet?
B: These Are the Songs
(Mr. Bongo)

The story of Tim Maia truly is a remarkable one and this larger than life giant of Brazilian funk, soul, disco and rock is the focus of this 45 release on Mr. Bongo. His untimely death in 1998 left a huge cultural gulf that was felt far beyond his native country. But let's take it right back to the late 60's and his debut single entitled 'What You Want To Bet' which gets an official release from Mr. Bongo, housed in a striking picture sleeve with original artwork.
At this time in his life he had returned from the U.S. and indeed sings in English here. From the opening bars the listener is treated to that uptempo 60's soul sound that perfectly compliments Maia's charming vocal. You simply can't help yourself from clapping along. Winner all day! On the flip, the singer displays his tender side on this soulful ballad that shows his ability as a natural crooner on the track 'These Are the Songs' that is sure to make it's way in to many a DJ's box as their end of nighter.

The original will set you back a lifetime in repayments so don't sleep on this must have version. Buy the record here. 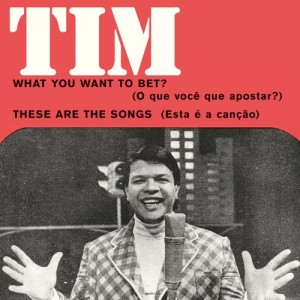