We have covered some fantastic 45s from Leeds based label ATA in the past but nothing has prepared us for this release from United Disco Organisation. On  'Send The Rain' / 'Funky Thing' they deliver an earth-core-shattering disco heat rock double to silence any critics and moaners who grumble about where their favourite label has gone. The truth is, they have been busy rebuilding their recording studio brick by brick so it seems that ATA are just getting started. Brought to you by producer/bassist Neil Innes and guitarist/vocalist Chris Dawkings this project is the label's first adventure in the land of disco music and just like the label's previous output, it ticks all necessary boxes and hits the sweet spot in the process. Primed for peak dancefloor action, this record will become every serious DJ's secret weapon. Listen to both cuts below and pre-order after the stream. Another ATA sureshot! 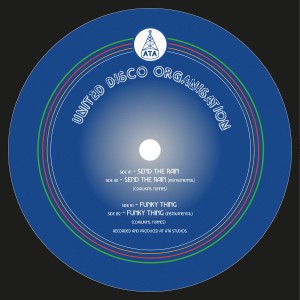