Never shy of releasing music by his UNKLE project in ever boundary-pushing formats, James Lavelle has outdone himself with three 45s from his latest album, 'The Road Part 1'. Available in July at the San Deigo Comic Convention, the collaboration with West Coast-based toy company Super7 has yielded the craziest 7" packaging yet.

For $50 you get a clear vinyl w. splatter single with dinked middle and Futura 2000 camo label featuring a track from the album and instrumental on the flip. Not only that there's also a Pointman figure with moveable head, arms and legs that fits into a clear plastic stand that doubles as a middle for the 45 and comes engraved with the UNKLE logo. These are housed inside a huge plastic clamshell Pointman 'head' that could double as a mask if you cut some eyes out of it.

There are three different tracks available in different colours: blue, green and pink with corresponding shells, splatter effect and figure colourways. I was lucky enough to get a green one via Daniel Barassi, 45 collector and infamous modifier of the Fisher Price kid's turntable into a fully functional portable player, who was at SDCC and collared all three versions himself when I gave him the heads up before sending mine over to the UK.

You can now order these online via the Super7 website but non-US buyers beware - the postage is an absolute killer and only the rich or the mega-fans are going to want to stretch that far. Aside from the postage and the possibility of also incurring customs charges on top there are also some drawbacks. Firstly - the size, the clam shell is huge and doesn't sit upright without support. Secondly, both the 45 and the dink are in there super tight, I thought I was going to break the single getting it out. The toy is nicely moulded but compared to the original Ben Drury-sculpted Pointmen from back in the 90s they're not quite as special - but for the money and what you're getting they're just fine.

I was slightly dismayed to find that the A side of my 7" seems to have been cut slightly off-centre so the needle really has to track the groove back and forth and you get a wavering effect on the strings in the track which really rendered it unplayable unfortunately. I have no way of knowing if they're all like this but the B side seemed a lot more stable if not entirely movement-free. As an object of desire for the price it's certainly worth it if you can get round the postage costs in some way but maybe next time vacuum-packing the figure and centre to the front of a thick card 7" sleeve (like the Rave Wars 45s) would be a better solution. 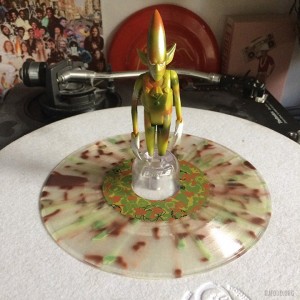 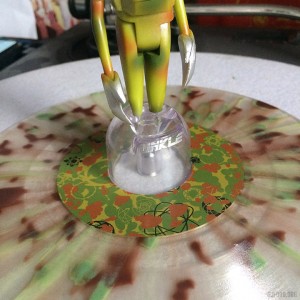 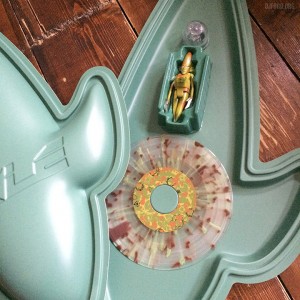