Vic Ruggiero - Blue Is The Color (Happy As A Lark)

A: Vic Ruggiero - Blue Is The Color
B: MC Zulu - Rocking Session
(Happy As A Lark)

If you pick up a newspaper today you might be led to believe that armageddon a g'wan. Nothing but impending doom and gloom is being printed. Well, in what could be the soundtrack current affairs Vic Ruggiero has penned this blues reggae joint that oozes charm.

Recorded when The Slackers were (once again) playing a 3-day engagement in Chicago, this tune began life as a spooky-dusty folk-rock head-nodder. Given the Jamaican treatment, the track struts confidently into the pantheon of politically charged reggae tunes.

MC ZULU takes the sentiment and invokes a modern day groundation to cast the power of positive music against all inequity workers and corrupt officials. Tuff version! 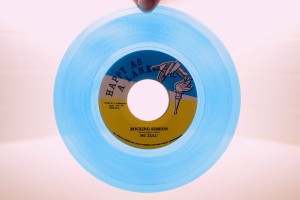