Oh lordy! It's safe to assume that the creative force behind the Delights label, producer Markey Funk, rarely entertains the notion of sleep.  Burgeoning ideas and concepts swirl around his gigantic brain and are unleashed on wax from time to time. He managed to squeeze in another release before the over stretched pressing plants shut their doors on the small independants for the year.

The concept behind Voxatone is very simple: exploring the sound qualities of vintage instruments with “vox” in their name. The first result is an otherworldly meeting between the 1950s Univox keyboard, the 60s Vox Continental organ and the 80s Soviet Polivoks synthesizer. Recorded at Mazkeka Studios, Jerusalem, with Elia Yakin on drums (the only “non-vox” instrument involved), Shay Landa and Markey are joined by Estonia’s man of many hats, Misha Panfilov, on Vox Phantom bass for two groovy psych cuts: the mid-tempo mind-bender 'Figure I.108' and the upbeat floor-stormer 'Figure III.122' – on the flip.

Don't dwell on this release for too long as it will be snapped up! Available to preorder from The Delights Bandcamp page now. 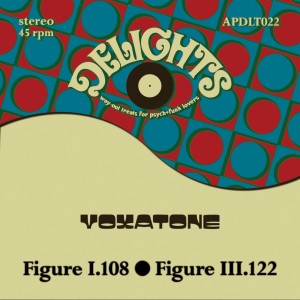