In my last record review here on 45 Live of the US-based label Mountain 45s, I waxed lyrical about the cut n' paste genre, well, here we go again!

So, unless there's a secret competition going on between producers over just how many samples one can cram onto a 45 - Think Smoove's 'A Quest Called Tribe' and 'Main Sourced', Boca 45's Donuts series or The Funk Brothers output amongst many others - the cut n' paste ethic is actually more alive than I thought it was, which fills me with joy. And remember, an edit is NOT equal to a cut n' paste track however 'classic' the source material is, the latter requires compositional and arrangement skills alongside the elusive 'feel' that elevates a track from the mechanical to the emotional.

The latest X-Ray Ted 45 achieves exactly that and on a label with the most accurate name imaginable; Bombs. It only took a few bars to rock by after dropping the needle on side 1 to instinctively know when something is right, 'Doin' My Thing' is a left, right and centre cut n' paste masterclass (as is side 2, but we'll get to that). Built heavily around Johnny Pate's classic flute laden dancefloor monster 'You're Starting Too Fast', Ted layers many a beat and break and intertwines vocal snippets to create something that...how shall I put it? Oh yeah, KICKS FRICKIN ASS. Honestly, this is dancefloor gold, and is the kind of record that you're going to build a set around...but will it be smack bang in the middle of peak time, or will you save it for the last track of the night?! Either way, if this is X-Ray Ted doing his thing, then don't stop doing it.

On to side 2, which I consider a total bonus as I'd buy this rekkid for side 1 alone. But what a bonus it is.

Back to the subject and history of cut n' paste and one can not mention the genre without talking about the Major Force label in Japan and one of its jewels from 1988, 'Return Of The Original Art Form' by Hiroshi & K.U.D.O. Featuring DJ Milo. An out-and-out classic and genre-defining piece of work, beautifully reimagined later as 'Re-Return Of The Original Artform' by contemporary proponents of the genre; Cut Chemist, DJ Harvey and DJ Format as well as informing many a producer about how to cut something out and paste it in the right place!

X-Ray Ted now joins that club of producers to present his take of this particular artform. With the rich palette of sources that is the original track and a whole bunch of new samples artfully injected into the groove, this version remains true to the vision that emerged 34 years ago (yeah, that's 34 years!) as well as having enough fresh flavour to make it new and a guaranteed peak-time dancefloor sureshot.

I can confidently say this 45 is going to be a hot ticket amongst DJs, it's exactly the kind of wax that I could spin till the cows come home (and what time is that by the way?). I suggest buying the moment it drops.

Out on 8th April at the Bombstrikes Bandcamp and all good retail merchants. 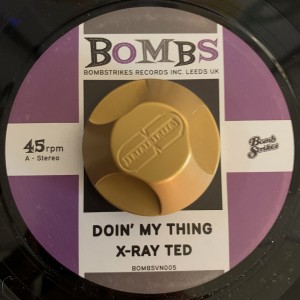 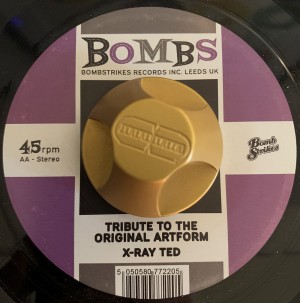