As 2021 tentatively gets going, we gotta strike forward with this bomb. The A-side 'Mirror Ballin' was originally out on digital in 2019, this disco-funk cut n' paste banger finally makes it onto wax along with a stonkin' new track in 'Party Time' on the B. Now, when people talk of formulas, one might say formulaic, and that usage is often associated with something that isn't thought out properly nor executed particularly well. But mixing the required amount of various ingredients for a tried and tested formula doesn't have to mean that at all, in fact, when the stars align, it can guarantee what you set out to achieve. Cut n' paste dancefloor music as a formula is one of life's greats, so if the producer has the prerequisite skills behind a mixing desk, a pair of perfectly functioning ears and the natural ability to select and splice sweet beats, breaks, horns etc whilst all the while adding plenty of PHAT into the mix, you end up with a 45 like this one.

'Mirror Ballin' is disco-funk cut n' paste at its best, carefully arranged over a wide soundstage, each element effortlessly flows into verse, break and bridge. Sonically speaking X-Ray Ted has totally NAILED IT, this sounds so tight, there's nothing in the way or clogging up the funk, it's just a wickedly funky dancefloor banger. Flip over for a new cut 'Party Time', doing exactly what it says on the tin, this cuts up and pastes a bucketful of sonic nuggets into a grin-inducing bomb, it's as simple as that. It's the kind of track that one might build a whole set around, a vibe that informs your party for the next 2 hours. It certainly will with me when we can finally get back out with a crowd to get loose. 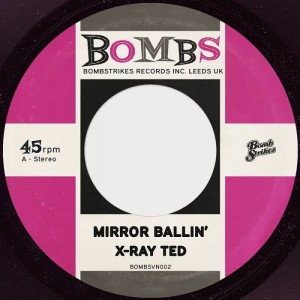