Ever since this was dispatched into interested party's cloud spaces in early December of last year we were left to wonder whether it would ever get pressed up onto a physical pocket-sized 45 for DJs and collectors to rock in the club or cool out to in the crib. We need wonder no longer as this UBB/G-Funk inspired 45 from Canadian co-conspirators Nick Bike and Flipout has finally dropped. 'Regulate The President' is a fun gangsta twist with a political message. It's sure to prick Secret Service ears and they will use all their might not to nod their heads in rhythmic approval once the mischievous Air Force One pilot sneaks it onto the POTUS playlist and blasts it through the aircraft!

Strictly limited to 350 under the radar copies this bumper 45 also includes an instrumental version plus a bonus a cappella edit. If you know like I know this will sell out fast. Head over to Flipout's Bandcamp page to get your fix without further delay! https://flipoutmusic.bandcamp.com/album/regulate-the-president-7 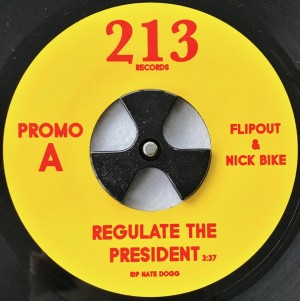