The nascent hip hop scene in the UK in the 80's would feature numerous crews looking to get on and make their mark in a saturated American market. They faced an uphill struggle to get a piece of the pie when the scene in the States was at it's peak and it was no easy rise. Many crews fell off at the first hurdle but there are a few that weathered the fiercest of storms and continue to breath life into the UK hip hop scene after all these years. Step forward Gunshot as a prime example. This East London crew burst onto the scene at the turn of the decade to dominate the pirates in the 90's and trouble a few majors too!

Following on from an eighteen year hiatus, the crew released the 45 'Sulphur' in 2018 and 'Burn Cycle' is the follow up release on the Underground United label out of Germany. Produced by Prime Cuts from the Scratch Perverts and featuring cuts by 45 Live's very own DJ Woody, this is another must have 45 from Underground United that will surely fly out. A menacing brass sample underpins the spitfiyah flows before Woody chop sueys the vocal sample into smithereens! Preview the dope video below before heading to the Underground United shop to cop doubles today. 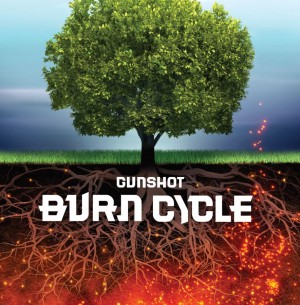